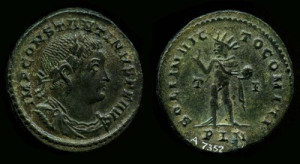 A Coin of Constantine the Great with “Sol Invictus” (Invincible Sun) on the reverse. The inscription reads “SOL INVICTO COMITI” which means “to the Invincible Sun, Companion (of the Emperor)”

Did you know that there was a long standing celebration that happened on December 25th before Christianity adopted it? The “Invincible Sun”, which was the official sun god of the Roman Empire was commemorated each year on the 25th of December just after the 7 day feast of Saturnalia done in honor of saturn. But where is the proof for such claims? Can we find solid evidence for such observances which are said to have happened on the 25th of December? Such a piece of evidence exists, and is known as the Chronography of 354.

Title page from the Chronography of 354

The ”Chronography of 354”, also known as the ”Calendar of 354”, was a Roman Calendar with illustrations alongside…

3 thoughts on “What was celebrated on December 25th before it became Christmas?”