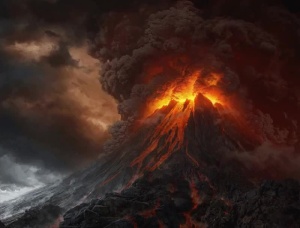 After a long journey, the chosen people – the Children of Israel as well as a mixed multitude who had left Egypt(Exo 12:38) behind them, were finally at the foot of Sinai to listen to God speak. Through the Thunder, Lightning, thick cloud, Trumpet noises, smoke, fire and earthquakes God would descend onto Mount Sinai to make Himself heard to His people for the first time(Exo 19:16-20). Traditionally we have come to know what proceeded from the Mouth of God as “The Ten Commandments”. The foundation of the Mosaic Covenant as well as the New Covenant. But the Ten Commandments are known in the Original Hebrew Manuscripts by a different term. The Word for Commandment in Hebrew is Mitsvah (H4687 – מצוה – BDB Definition: commandment) while a different Hebrew word is used in conjunction with “Ten” when the Scriptures speak of the “Ten Commandments”.

The above verses literally say “Ten Words/Matters/Sayings” and not “Ten Commandments. This fact can be clearly seen by comparing the above to the introduction of the Ten Words in Exo 20:

The reason this is significant is because there was no impulsion for anyone to do what He uttered. God was not forcing the people to Obey Him. A “Commandment” had the connotation of force, but God simply declared these Ten Matters as what really was important in His eyes. His people were given a choice to walk in the upright path, and He was showing the way. Before He came down to Sinai, God had already told Moses that He would show what He requires from His people.

Exo 19:5-9 Now therefore, if ye will obey my voice indeed, and keep my covenant, then ye shall be a peculiar treasure unto me above all people: for all the earth is mine: And ye shall be unto me a kingdom of priests, and an holy nation. These are the words(H1697-Dabar) which thou shalt speak unto the children of Israel. Moses came and called for the elders of the people, and laid before their faces all these words which the LORD commanded him. And all the people answered together, and said, All that the LORD hath spoken we will do. And Moses returned the words of the people unto the LORD. And the LORD said unto Moses, Lo, I come unto thee in a thick cloud, that the people may hear when I speak(H1696-Dabar) with thee, and believe thee for ever. And Moses told the words of the people unto the LORD.

But does this mean the “Ten Words” are any less important? Not at all. These are the words God chose to declare first and foremost to His people. They encapsulated His Heart and what He expects from a Godly people. He would have continued and spoken the entirety of His instructions(Torah) known to us traditionally as the Law, stopping and delivering the rest to Moses only because the people were afraid.

Exo 20:19-22 And they said unto Moses, Speak thou with us, and we will hear: but let not God speak with us, lest we die.And Moses said unto the people, Fear not: for God is come to prove you, and that his fear may be before your faces, that ye sin not. And the people stood afar off, and Moses drew near unto the thick darkness where God was. And the LORD said unto Moses, Thus thou shalt say unto the children of Israel, Ye have seen that I have talked with you from heaven.

Now the importance of the Ten Commandments – rather the “Ten Words” of God, has been discussed before in “Is Love, all that matters? – Was the Ten old Commandments overuled by Two new Commandments?” and about the connection of the Ten Words to the rest of the instructions in “Law of God & Law of Moses – 2 Laws or 1?”

These Ten Words are the “Word of God” which proceeded straight out of the Mouth of God in the ears of all the people at the foot of Sinai. It is the Word that keeps us alive according to:

Mat 4:4 But he answered and said, It is written, Man shall not live by bread alone, but by every word that proceedeth out of the mouth of God.

And we see Yeshua (Jesus’ true name) equating “the Word of God” to the “Ten Words” and the Instructions(Torah) given through Moses.

Mar 7:9-13 And he said unto them, Full well ye reject the commandment of God, that ye may keep your own tradition. For Moses said, Honour thy father and thy mother; and, Whoso curseth father or mother, let him die the death: But ye say, If a man shall say to his father or mother, It is Corban, that is to say, a gift, by whatsoever thou mightest be profited by me; he shall be free.  And ye suffer him no more to do ought for his father or his mother; Making the word of God of none effect through your tradition, which ye have delivered: and many such like things do ye.

In the above passage Christ compares the Word of God and the Traditions of the elders. He is very clearly saying that The Commandments of God are equated to the Word of God. And that Exo 20:12, Exo 21:17 & Lev 20:9 is emphatically the Word of God.

And again Yeshua equates the Law (Torah) to the Word of God.

Joh 10:34,35 Jesus answered them, Is it not written in your law, I said, Ye are gods? If he called them gods, unto whom the word of God came, and the scripture cannot be broken;

He reiterates that the Word of God can neither be broken as well, calling the Law, “Scripture” in this instance.

So in Conclusion, we see that the Ten Commandments as it is traditionally known should ideally be called the “Ten Words/Sayings/Matters” of God and the same along with the rest of the Law/Instructions(Torah) was without a doubt known and proclaimed as the “Word of God” by Messiah Yeshua. Let us remember that these “Ten Words” were what God picked to share with His people first, showcasing the importance of abiding by them if we are in Covenant with our Creator.

1 thought on “The Ten Words of God”