Passover is intricately connected with the Blood of the “Lamb”, whether it be the remembrance of salvation through the Passover in Egypt or the fulfillment of Passover in Messiah who shed His blood on Passover day(John 19:14) as our Lamb(1Pet 1:19).

But most of us do not see the significance of God’s command to sacrifice a Lamb, especially when the Israelites were under the rule of the Egyptians.

Let’s look at the first hint given in Genesis when Joseph met his brothers for the first time:

But why was it an abomination to the Egyptians to eat with Hebrews? No reason is given here. Many of us conclude that it would have been a cultural practice where the Egyptians saw themselves superior to the Hebrews. But this was not the reason it was seen as an abomination. Let’s look at the next hint:

Gen 46:33,34 And it shall come to pass, when Pharaoh shall call you, and shall say, What is your occupation? That ye shall say, Thy servants’ trade hath been about cattle from our youth even until now, both we, and also our fathers: that ye may dwell in the land of Goshen; for every shepherd is an abomination unto the Egyptians.

When Moses speaks to Pharoah and asks him to let the Hebrews go, so that they can sacrifice to YHVH, the Pharoah tells Moses to do their sacrifices inside Egypt. To which Moses replies in the above manner seen in Exo 8:26. The phrase “Abomination of the Egyptians” does not mean that they saw sheep as an unclean/abominable animal. On the contrary, they worshiped it. The phrasing is written in the perspective of the Israelites and not the Egyptians. Meaning the sheep was a sacred animal which was an abomination that the Egyptians were involved in, in the eyes of God and His people. We see evidence for this in the following verse.

Pagan gods with the likeness of Sheep in Egyptian History

Khnum and Anum were the two main deities of the Egyptians that had a connection to the Sheep.

Amun is a major ancient Egyptian deity which was later fused with the Sun god, Ra, as Amun-Ra or Amun-Re. Amun-Ra held the position of transcendental, self-created creator deity and was positioned as King of Gods developed to the point of virtual monotheism where other gods became manifestations of him. With Osiris, Amun-Ra is the most widely recorded of the Egyptian gods and was depicted at one point as a ram-headed deity. 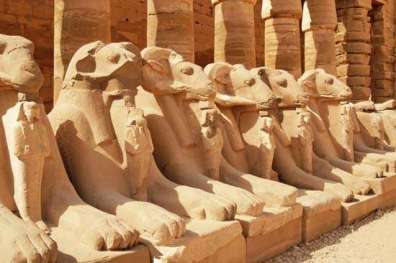 Prior to entering the Temple of Amun in Karnak, there is a long row of Sphinxese depicting the ram of the god amun with the king standing under its paws beneath its chin.

The first plague that came upon Egypt may have also targeted Khnum, as he was regarded as the guardian of the Nile.

Conclusion
One can only wonder whether the Hebrews were making bricks for such temples that depicted the sheep as a god figure. In such a background, now we can understand the true circumstances of having to sacrifice sheep to YHVH. Now we can understand why Moses goes to say “would they not stone us” if they sacrificed inside Egypt (Exo 8:26). The stakes were very high, as God was commanding the Hebrews to take a stand against the gods of Egypt. When they sacrificed the lambs at Passover, they would have had to have complete faith in God. If they were wrong, the Egyptians very well could have stoned them the next day for desecrating their land.

By asking to make a public display of the blood of the lamb, God was saying there is no other who can protect the Hebrews other than YHVH. And on the other end God was asking His people to put their faith in Him. To rise up against the abominations of Egypt and show that they are ready to follow God instead.

And there lies the parallel for us, as we enter the season of Passover. As we remember the death of Yeshua on Passover day according to the Gospels, let’s remember that we are also called to rise against the abominations of our past and put complete faith in him. Let us put our slavery to death behind us, and walk towards the Land God has promised His people. Amen.