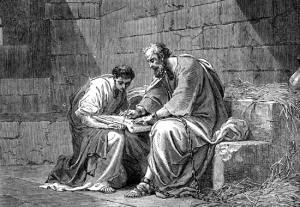 Did Paul break God’s Law? Did he teach believers to do the same? one third of the New Testament writings consist of Paul’s letters, and it is a fact that his letters create most of the central doctrine of Christianity today. So it is advantageous for us to know whether Paul was indeed a breaker of God’s Law written in the Old Testament, and whether he taught the same to other believers. Or are all of these false accusations against a Law abiding Child of God? Let us look at the evidence.

Act 21:18-24 And the day following Paul went in with us unto James; and all the elders were present. And when he had saluted them, he declared particularly what things God had wrought among the Gentiles by his ministry. And when they heard it, they glorified the Lord, and said unto him, Thou seest, brother, how many thousands of Jews there are which believe; and they are all zealous of the law: And they are informed of thee, that thou teachest all the Jews which are among the Gentiles to forsake Moses, saying that they ought not to circumcise their children, neither to walk after the customs. What is it therefore? the multitude must needs come together: for they will hear that thou art come. Do therefore this that we say to thee: We have four men which have a vow on them; Them take, and purify thyself with them, and be at charges with them, that they may shave their heads: and all may know that those things, whereof they were informed concerning thee, are nothing; but that thou thyself also walkest orderly, and keepest the law.

It is fairly clear that the accusations against him, such as – “Paul is teaching the Jews outside Judea, to forsake Moses (God’s Law), not to circumcise their children & walk after their customs” – were all false. According to James, Paul was “walking orderly, and keeping the Law”. But since there were rumors and accusations against Paul, the elders along with James wanted to publicly announce and demonstrate the truth to his accusers.

Now many would not really understand the deep meaning of the act that was performed to exhibit that Paul was obedient to God’s Law. Let us take a closer look at what Paul actually did to showcase his obedience.

Vows & Purification
It is clear that James asked Paul to “purify” himself with four others that had made a vow. But what was this “vow”, what was this “purification” and why did Paul purify himself along with these people?

Paul had made a Nazarite vow
In Acts 18:18 we see that Paul shaves his head because he had made a vow. The only vow made to God that had instructions to shave ones head was – a Nazarite Vow specifically mentioned in Numbers Chapter 6.

James’ instructions
Even though Paul would have gone to the Temple to complete his Nazarite vow, by offering the necessary sacrifices and shaving his head once again, James saw that this was clearly not enough to make a declaration. He asked Paul to pay for the four other men as well for their purification, so they can also get their heads shaved.

Paul’s purification
In Act 21:26 Luke records “Then Paul took the men, and the next day purifying himself with them entered into the temple, to signify the accomplishment of the days of purification, until that an offering should be offered for every one of them.” Paul finished the vow and paid for the necessary sacrifices for purification, for himself and the four men. Later Paul would tell the Governor Felix that “Whereupon certain Jews from Asia found me purified in the temple, neither with multitude, nor with tumult”(Act 24:18).

Conclusion
It is fairly clear that Paul was obedient to God’s Law, both because of James’ declaration that “the accusations/rumors were nothing because he walks orderly and keeps the law” as well as Paul’s act of taking a Nazarite vow and purification at the temple. Even today, the majority of Christians believe in the rumors and false accusations that were laid against Paul. If we would only read James’ words regarding Paul’s walk with God and understand the acts that Paul did, we would clearly see that he did not teach against God’s Law or break it in anyway.

What about the Gentiles?
Now most of us who read the above and agree that Paul indeed kept God’s Law and did not teach against it, would have a question about the need to obey God’s Law as Gentiles. In Acts 21:25, James himself says that they have written to the gentiles about their decision on what they should compulsorily observe, alluding to the judgement made in Acts 15. (A lengthy discussion can be found on this topic as a complete study by clicking on this link) This decision pertained to the believers coming in from the Gentile nations, and was the absolute minimum which they had to do, to be considered part of the congregation. The four key commandments which were, abstaining from food sacrificed to idols, strangled animals, blood & fornication, are all specifically taken from Leviticus chapter 17 & 18.

What has led to this big confusion and misunderstanding about Paul and his letters?
Paul is definitely one of the most misunderstood people in the New Testament. Being so far removed from the time and circumstances, as well as reading with proper context could be pointed out as the main reasons for this confusion.

Even the apostle Peter warned the congregations about Paul’s letters when he wrote “As also in all his epistles, speaking in them of these things; in which are some things hard to be understood, which they that are unlearned and unstable wrest(pervert), as they do also the other scriptures, unto their own destruction. Ye therefore, beloved, seeing ye know these things before, beware lest ye also, being led away with the error of the wicked(lawless), fall from your own stedfastness (2Pet 3:16,17). Peter said that Paul’s letters are hard to understand, and his words are being twisted by the unlearned and unstable to be led to lawlessness.