Questions are often raised regarding the Biblical Day, Week, Month & Year, while some even regard it worthless. The internationally accepted calendar system(known as the Gregorian Calendar) which is in use today, is not the same as the Biblical Calendar. When God created the Sun and the Moon, it was for the benefit of His creation to know His Appointed times and also the divisions of days and years as He set it to be. 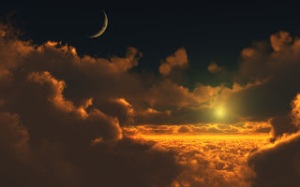 Let us examine the Scriptures and find out the Day/Week/Month/Year which is Biblically accurate, and study the differences and similarities of the Standard Gregorian Calendar which is in use today, to the Biblical Calendar instituted by God.

The Biblical Day
♦ The Biblical day was divided into 12 Hours/Parts of Daytime (John 11:9) and presumably 12 Hours/Parts of Night (Mat 20:6)
♦ The Biblical day starts at Sundown
→ God’s Prophetic Appointments were to be from evening to evening [Sundown to Sundown] (Exo 12:18, Lev 23:32).
→ Nehemiah orders the Gates of Jerusalem to be closed when it was getting dark, denoting the sabbath started at evening (Neh 13:19)
→ The laws of uncleanness denotes that a person who becomes unclean because of a reason such as coming to contact with a carcass will be unclean till evening. If the person becomes unclean at night, he/she is unclean till the next evening (Lev 11:24,25, Deut 11:23)
→ A person who is put to death was supposed to be buried before the evening (Deut 21:22,23, Jos 8:28, 10:26,27)
→ Samson asks a riddle that needed to be answered within 7 days. The philistines answer him before the eve of the seventh day, denoting the end of the day was at sunset (Judg 14:12,18)
→ The sabbath was about to start when Yeshua was taken down from the cross in the eve (Luk 23:54, Joh 19:31)

Differences/Similarities between the Gregorian Week/Biblical Week
Both the Gregorian and Biblical Calendar weeks consists of 7 days. In ancient times, some cultures have had weeks which contained differing number of days and some cultures still use these today. Even though the number of days in a week, is equal in both Calendars, the day numbers vary. (Eg: Most European countries consider Monday as the first day of the week, while many Middle-East countries consider Saturday as the first day)

The Biblical Week
♦ The Biblical Week has seven days
→ God’s creation took 6 days and a 7th day of rest, so that the week contains 7 days (Exo 20:9-11)
→ The feast of Weeks (Pentecost – which means 50 days) was to be celebrated by counting 7 weeks (Lev23:15,16, Deut 16:9,10)
→ The number seven is connected to the word “week” in the Scriptures (Gen29:27)
♦ The days in the Biblical week did not have names such as “Monday, Tuesday, etc.” The days in the Biblical week were numbered as 1st Day, 2nd Day, 3rd Day, 4th Day, 5th Day, 6th Day & the 7th Day which was known as the Sabbath. (Exo 16:5,22, Exo 20:11, Joh 2:1)
♦ The 7th Day in the Biblical Calendar is the day corresponding with Friday Eve/Sunset to Saturday Eve/Sunset in the Gregorian Calendar.
→ The Greek word used for the “Sabbath” in the Original Manuscripts of the New Testament  “sabbato” is the same name used for Saturday in Greek even today! In other words ; In Greece, the day which is called “Saturday” is still called “Sabbato” – the same word which is in the Original Greek New Testament Manuscripts which is translated as “Sabbath” in English.
→ Look at the similarities in the names used for Saturday in other Languages and “Sabbath” – Arabic: Sabet, Armenian: Shabat, Bosnian: Subota, Bulgarian: Sabota, Corsican: Sàbatu, Croatian: Subota, Czech: Sobota, Greek: Sabbato, Indonesian: Sabtu, Italian: Sabato, Latin: Sabbatum, Polish: Sobota, Portuguese: Sábado, Russian: Subbota, Serbian: Subota, Slovak: Sobota, Slovene: Sobota, Somali: Sabti, Spanish: Sabado, Sudanese: Saptu, Ukrainian: Subota
→ The Encyclopedia Britannica, 11th ed. vol. 4, p. 988, tells us: The week is a period of seven days, having no reference whatever to the celestial motions — a circumstance to which it owes its unalterable uniformity… It has been employed from time immemorial in almost all eastern countries. The Hebrew people spoke of the days of the week by number rather than by name. The only day that had a name was the seventh day which was called Shabat, the Sabbath, or the rest day. In at least 108 different languages the name for the seventh day, corresponding to our “Saturday”, is a word meaning “rest day.”
→ Some point out the Calendar changes in history makes it impossible to know the actual day of the Sabbath. This theory is inaccurate. The change from the Julian calendar to the Gregorian Calendar, has had no effect whatsoever upon the order of the days of the week. (click here for details on this calendar change). Because of this, the Calendar changes has had no effect towards Saturday which is still the same day Yeshua celebrated the Sabbath on.

Differences/Similarities between the Gregorian Month/Biblical Month
The Gregorian Calendar system has no reason for a Month to be 28,29,30 or 31 days. This system was a main characteristic of the Gregorian Calendar, and was done so that the days of the year would equal to 365 days. Unlike the Gregorian calendar, the Biblical Calendar depends on the Moon to calculate the beginning of the month. A complete revolution of the Moon is considered a Month in the Biblical Calendar. Science determines that a Moon revolution lasts roughly about 29.5 days, and because of this reason, a Biblical Month lasts 29 or 30 days.

The Biblical Month
♦ The Biblical Month is connected to the Moon in Scripture
→ 1Ki 8:2  And all the men of Israel assembled themselves unto king Solomon at the feast in the month(H3391-ירח- yerach-month) Ethanim, which is the seventh month(H2320-חדשׁ-chôdesh-new moon). The 2 Hebrew words translated as Month in our English Versions are “Yerah” and “Kodesh”. “Yerah” means Month, while “Kodesh” means New Moon. See 1Kin 6:38 as well.
→ Gen 29:14 & Num 11:20,21 contains “space of” or “whole” month, using the Hebrew word “Khodesh” while 2Kin 15:13 & Deut 21:13 contains “full” month, using the Hebrew word “Yerah”. Both these words are clearly connected, showing the relation of Moon to Month, Biblically.
♦ The New Month, or the first day of the Month is proclaimed when there is a New Moon which is identified by the first visible sliver of the Moon.
→ The New Moon(Kodesh) is mentioned as a “particular day” in 1Sam 20:5,18, 2Kin 4:23, Eze 46:1,6 indicating that it was a day which was proclaimed in some way.
→ The word Hodesh originates from a Hebrew word called H2318-חדשׁ-châdash which means “new”, “to make new” or “renew”. The moon itself is not renewed, but with the Lunar cycle, the light of the Moon increases, becomes full, decreases and goes dark. And it is again renewed, and the cycle continues. In this way, when the first sliver of light is seen on the Moon, the beginning of the month is proclaimed.
→ Some hold to the belief that the Conjunction (Full dark Moon) is the New Moon as per Modern Astronomy. This is hard to believe, as the people in ancient times would not have been able to accurately know the day of Conjunction as the Moon can stay dark for more than 2 days
♦ Much like the sun indicates the beginning of a day, the Moon indicates the beginning of the Biblical Month. Even an uneducated person could have understood when the New Month begins, just by looking up at the sky, with this sign that God created in the Heavens.

Differences/Similarities between the Gregorian Year/Biblical Year
The Gregorian Calendar system calculates a year by counting 365 days (366 days in a leap year) which is the time it takes for the earth to finish a revolution around the Sun, hence it is known as a Solar Calendar. The Biblical Calendar on the other hand, depends on the Sun and Moon both to calculate the beginning of the Year, hence being known as a Luni-Solar Calendar. Even though January 1st is regarded the day of the New Year in the Gregorian Calendar (Roman Consuls in the time of the Roman Empire, as far back as 153BC, first entered office on January 1st), The Biblical Calendar is determined completely differently.

The Biblical Year
♦ The Biblical Year began with the New Moon when the Barley Harvest was in the stage of ripening which was called “Abib” in the Scriptures. The period between Biblical New Years have 12 or 13 months or New Moons.
→ The month of the Abib is called the first month in Scripture (Exo 12:2, 13:4, 34:18)
→ Abib is a state of ripening in Grains. Exo 9:31,32 And the flax and the barley was smitten: for the barley was in the ear(Abib), and the flax was bolled. But the wheat and the rie were not smitten: for they were not grown up. (H24 – אביב – aw-beeb’ – A state of ripening)
→ Abib is the state which is, in between the stage of green colour ripening grain and completely ripe golden streaks of grain. It is the stage when the grain is a light yellowish colour.
→ The Month of Abib is also known as Nisan in the Scriptures (Est 3:7, Neh 2:1)
→ The Month of Abib is usually the month that the Spring/Vernal Equinox happens
♦ To this day, the Karaite Jews in Israel engage themselves in an exercise called the Abib Search to ascertain whether the First Month can be proclaimed. This way, when the Grain is Abib and the Sliver of the New Moon appears in the Sky, the First Biblical Month is proclaimed.

Conclusion
One could ask whether knowing the “Biblically Accurate” dates, really matter? Or whether there is any value in understanding and studying these things and knowing both the similarities and differences in our Standard Calendar and the Biblical Calendar? When God says 7th Day, He means the 7th Day and no other Day. When He says the 1st Month, He means the 1st Month and no other month. Jeroboam the 1st King of the Divided Kingdom of Israel, did just this. He instituted a Feast on the 8th Month, which was like God’s Feast, when God had specifically told people to celebrate the Feast on the 7th Month (1Kin 12:32,33).

I am in no way saying, that we should throw the Gregorian Calendar away, as it is recognized as the standard amongst the whole world. But I am saying that all of us need to learn God’s Calendar and use His days and His ways to worship, honor and draw close to Him. The lack of knowledge of His calendar has led to so many misunderstandings and mistakes in our walk with Him. His Appointed Times/Feast all depend on His Calendar. This is the same Prophetic Calendar which Yeshua used and fulfilled by His Death(Passover), His Resurrection(Firstfruits) and Giving of the Holy Spirit(Pentecost). It is time to mend our ways and come back to Him. Are we really too technologically advanced to adhere to His Calendar by lifting up our eyes to the Sun and the Moon that He created?