Most Christians believe that the Five Functions or duties noted by Paul in Eph 4:11, commonly known as the “Five-Fold Ministry” came about after Yeshua(Hebrew name of Jesus). Namely, The Apostles, Prophets, Evangelists, Pastors & Teachers. Even though we do not see many Apostles, the other categories are seen in almost all “Free Churches” as well as ones from traditional backgrounds.

Are these functions new ones? Were these functions there before Messiah’s appearance, even in Old Testament times? Are these Positions of Power or Duties to be carried out as Servants? These are some of the questions we will try to answer today.

In the following explanations of each of these functions, we will also take a closer look at the origins of these titles by looking at the Greek and Hebrew words which the English words derive from. The Strong’s Greek/Hebrew concordance has been used for this purpose, alongside the KJV Translation of the English Bible.

The word “Apostle” in the English language originates from the Greek equivalent “Apostolos” which meant “a messenger” or “one that is sent”. This was not a title specifically made for Christianity, for any messenger would have been called “Apostolos” in Greek. In Joh 13:16, the Greek Word “Apostolos” is translated as “he that is sent” while in 2Cor 8:23 & Philip 2:25 it is translated as “messenger” revealing the true meaning behind the word apostle.

Most people have misunderstood Luke 6:13 to mean that Christ created this new position called “Apostle”. Luk 6:13 And when it was day, he called unto him his disciples: and of them he chose twelve, whom also he named apostles. The true meaning should be that He chose 12 amongst His pupils as the ones who would take His message out into the world.

As the word “Apostle” derives from its Greek cognate “Apostolos”, this word cannot be found in the Old Testament. But this does not mean “messengers” who spread God’s Word were not found in the time before Messiah. Haggai was known as the “messenger” of the LORD (YHVH) centuries before the Apostles in the New Testament(Hag 1:13). The priests who worked in the Temple were also known as “messengers” of God(Mal 2:7). The Scripture say that many “messengers” of God were sent before the Babylonian exile(2Chr 36:16).

Much like the “Apostle” which derived from the Greek word “Apostolos”, the English word “Prophet” also derives from the Greek Word “Prophetes”. The Old Testament had many Prophets. Naming them, I think, is unnecessary. Although, I must mention a few to help you understand what it means to be a Prophet. A Prophet is not only the ones who are called, “Prophet – so and so”. Whoever speaks for God, in the name of God, and represents Him, is a Prophet. It is not a designation. It is merely a duty and a description of what the person does. Abraham (Gen 20:7), David (Acts 2:30), Enoch (Jude 1:14) are but a few characters written in the Scriptures who were never known specifically as “Prophets”, even though they were clearly considered Prophets.

Yeshua was also called a Prophet (John 4:44, Luke 4:24, 13:33, Mat 13:57, Acts 3:22,23, 7:37), and prophesying through the Holy Spirit was done before the Day of Pentecost. Zechariah, Father of John, prophesied being filled with the Holy Spirit (Luke 1:67). A person can also prophesy(Say something that comes from God) without knowing it, like Caiphas, the High Priest who prophesied about Yeshua dying for the whole Nation(John 11:51)

The Greek word “yoo-anghel-idzo” cannot be seen in the Old Testament Scriptures which were written in Hebrew. Much like in the case of the word “Apostolos”, this does not mean the function of an Evangelist (who brings/preaches Good News) was not there in Old Testament times. The word “Evangelist” itself can be seen only 3 times in the New Testament (Eph 4:11, Acts 21:8, 2Tim 4:5) even though the function of an Evangelist (Bringing/preaching Good News) “G2097 – “yoo-ang-ghel-id’-zo” can be seen over 50 times.

The author of Hebrews in Heb 4:2 says “For unto us was the “gospel preached”, as well as unto them“. The word which is translated as “gospel preached” here is G2097 – “yoo-ang-ghel-id’-zo”. Who does the author refer to as “them” in this verse? The context reveals that it is the people of Israel in the Old Testament, which means “Evangelizing” happened in the Old Testament times as well. (Please read Heb 4:6 for a similar verse and Chapter 3 for context)

Positions or Duties? Leaders or Servants?
In some Christian congregations today, being an Apostle, Prophet, Evangelist, Pastor or Teacher carries a sense of power and hierarchy. These have become titles and designations rather than functions in the body of believers. It is important to respect everyone, from a fellow believer to one who is appointed to lead/serve. But sad to say, this respect has been misused, and at times, changed into positions of power. 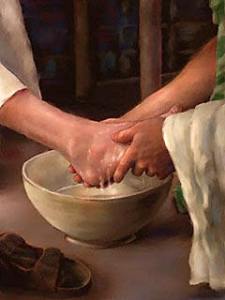 Even though He was the epitome of Righteousness and God’s image, what did He say to His Disciples under Him? What was the example He left with His followers who were to become leaders in the body of believers?

Joh 13:14,15  If I then, your Lord and Master, have washed your feet; ye also ought to wash one another’s feet. For I have given you an example, that ye should do as I have done to you.
Mat 20:26  But it shall not be so among you: but whosoever will be great among you, let him be your minister; And whosoever will be chief among you, let him be your servant: Even as the Son of man came not to be ministered unto, but to minister, and to give his life a ransom for many.
Luk 22:25-27  And he said unto them, The kings of the Gentiles exercise lordship over them; and they that exercise authority upon them are called benefactors. But ye shall not be so: but he that is greatest among you, let him be as the younger; and he that is chief, as he that doth serve. For whether is greater, he that sitteth at meat, or he that serveth? is not he that sitteth at meat? but I am among you as he that serveth.

Whoever is appointed to serve, whether he/she be an Apostle, Prophet, Evangelist, Pastor or Teacher, they are all servants. And according to the example left to us by Yeshua, whoever is a leader, is in fact a servant who is humble enough to wash the feet of whoever is put under his/her authority.

Conclusion
The “Five fold Ministry” is thought by many to have been instituted after Yeshua, even though there are clear indications that all of these functions existed well before New Testament times. Most of these misunderstandings have come about because of the English translations we read. As seen in the evidence above, even though most of these cognate words (English words that have derived straight from the Greek counterparts – eg. Apostle & Apostolos, Evangelist & Yooanghelistace) cannot be seen in the Hebrew Old Testament Scriptures (because they derive from Greek), it does not necessarily mean that the function did not exist in Old Testament times.

Not only were all of these functions or services there in the Old Testament era, they were part and parcel of God’s Word. Accordingly Christ Himself embodied all of these functions, acting as a servant rather than one who is served, leaving His Church an example to follow. “whosoever will be chief among you, let him be your servant”.