The Food/Dietary Laws written in the Scriptures are looked upon by some, as an ancient tradition that is not practical and has no value to us, who live in the 21st Century. But what if there was scientifically quantifiable proof that the “Clean” and “Unclean” animal division given by our Heavenly Father is reliable, health-wise?

Today, I present a research paper published by the John Hopkins University in 1953, by a Doctor named David Macht. A Pharmacologist, Dr.Macht has published over 900 scientific studies, and three books as well as served in the Medicine Faculty at Johns Hopkins University. The “David  Macht Research Award” was established in 1982, in his honor, and is awarded to Medicine Students to this day.

In his research, he made a clear connection between the toxicity levels of different meats, and God’s instruction to His people, of what they may and may not eat. (Leviticus 11 & Deuteronomy 14). His investigations were published on the “Bulletin of the History of Medicine” Sep/Oct Issue in 1953, and was titled “An Experimental Pharmacological Appreciation of Leviticus XI and Deuteronomy XIV”.

Please click these images to enlarge and read through his findings, in the page excerpts provided. (I have highlighted some key areas for your viewing ease). In the tables with toxicity levels, any number below 75% is deemed Toxic as per Dr.Macht’s explanation. 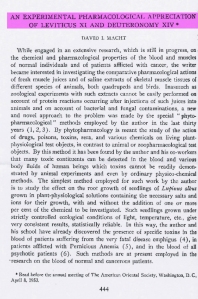 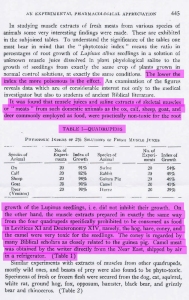 Out of all the animals and animal classifications provided in Lev 11 & Deut 14, Dr. Macht experimented on the categories of Four-footed animals, birds & fish. He did the first set of experiments on the animals specifically mentioned by name in the Scriptures, and found out that the meat of Ox, Calf, Sheep, Goat, Deer were all practically non-toxic to our bodies, while Pig, Hare, Coney, Camel were all high in Toxins.

Next, he tested the category of Birds and found out that the Chicken, Duck, Goose, Turkey, Pigeon, Quail meat were all non-toxic, but that birds of prey such as Owl, Hawk, Falcon were all toxic.

Overall, Dr.Macht’s Experiments have provided solid scientific proof that the meats declared unclean actually does pollute our bodies with harmful toxins. These toxins, in time, will build up in our bodies and lead the body into all kinds of illnesses.

We have to remember that anything an animal eats will become part of its flesh and eventually become a hazard to us, if we end up eating that animal. Most of the animals categorized as “Unclean”, if not all, are specifically there to clean our environment of pollutants and garbage. Why would we want to make those pollutants a part of our bodies?

Much like parents advice their children not to put dirt in their mouths, because they care about their children’s well being – Our Heavenly Father has also instructed us on what to eat and what not to eat, for our own sake. God Almighty, who created our bodies and all the different kinds of animals knew which animals are good for us and which ones aren’t. Dr.Macht’s research merely proves that God in all His glory, is all-knowing and all-powerful. And that His instructions regarding food was for the benefit of us all.

The following List and examples would hopefully be a helpful guide in figuring out what to eat, and what not to eat, according to God’s Word, which will in turn lead us all to better health and well being.

Clean Food classification according to Lev 11 & Deut 14
MEAT: It must have a hoof and the hoof must be parted; it must chew its own cud. A cloven hoof is a divided or split hoof. Animals that chew their cud are known as ruminants, whose stomach consists of four chambers. The process that occurs in the four stomachs allows ruminants to eliminate bacteria, toxins, parasites and other items that might become part of the flesh and eventually end up in the human body when it is consumed at the table.
• Cattle • Sheep • Goat • Deer • Gazelle • Roe deer • Antelope

FOWL: Fowl must not be a meat-eating fowl. If a bird eats rats or snakes or other animals that are unclean to begin with, they will be ingesting the poisons and toxins contained in the meat of the animal they are eating.
• Chicken • Geese • Turkey • Ducks • Doves • Pigeons • Partridge • Quail • Etc.

Unclean Food classification according to Lev 11 & Deut 14
MEAT: If it has no hoof; if the hoof is not parted; if it does not chew its own cud.
• Camels • Rock badgers • Rabbits • Pigs • Horse • Etc

SEAFOOD: All crustaceans and mollusk shellfish. Shellfish have a unique ability to purify water of pathogenic bacteria such as those found in raw sewage. Clams and oysters can filter up to fifty gallons of seawater a day. These creatures clean the seas of waste, but the waste becomes part of their flesh.
• Crabs • Lobsters • Shrimp • Prawns • Crayfish • Clams • Mussels • Oysters • Scallops • Etc.