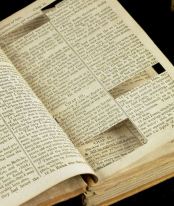 Many Christians turn to Hebrews 7:12 to point out that God’s Law has changed. After all, that is what our English Translations say. But is this an accurate translation? It certainly fits in with the dominant Theology of mainline Christianity which assumes that God’s Law has been changed, abolished or done away. In this study, we will investigate whether the Greek Originals offer evidence to challenge this translation, and whether we can conclusively prove if this verse speaks of God’s Law being changed or not.

A. The Greek word for “Change”

Change is defined as “make or become different” and “take or use another instead of”. The Greek word used in the New Testament for such an act is “allasso” (Strong’s Greek Concordance number 236). This word is used 6 times in the New Testament writings as showcased below.

B. The Greek words translated as “change” in Hebrews 7:12
The Greek words that stands in place of “change/changed” in Hebrews 7:12 are “Metathesis/Metatithemi”. Metathesis which is also used in English Vocabulary (Originating from the Greek) is defined as ‘transpose, change the position of’. We could say that it means “changing places” or “transferring”, but it surely is different from “allasso”.

Heb 7:12  For the priesthood being changed(μετατίθημι-metatithemi-G3346), there is made of necessity a change(μετάθεσις-metathesis-G3331) also of the law.

The usage of these words in the whole of the New Testament, are given below for your reference. Comparing how the same word is translated to English in different verses, surely provides us a clearer picture of what these words really mean.

G3346 – μετατίθημι – metatithemi – transfer
Act 7:16  And were carried over(G3346) into Sychem, and laid in the sepulchre that Abraham bought for a sum of money of the sons of Emmor the father of Sychem.
Gal 1:6  I marvel that ye are so soon removed(G3346) from him that called you into the grace of Christ unto another gospel:
Heb 7:12  For the priesthood being changed(G3346), there is made of necessity a change also of the law.
Heb 11:5  By faith Enoch was translated(G3346) that he should not see death; and was not found, because God had translated(G3346) him: for before his translation(G3331) he had this testimony, that he pleased God.
Jud 1:4  For there are certain men crept in unawares, who were before of old ordained to this condemnation, ungodly men, turning(G3346) the grace of our God into lasciviousness, and denying the only Lord God, and our Lord Jesus Christ.

G3331 – μετάθεσις – metathesis – transference
Heb 7:12  For the priesthood being changed, there is made of necessity a change(G3331) also of the law.
Heb 11:5  By faith Enoch was translated(G3346) that he should not see death; and was not found, because God had translated(G3346) him: for before his translation(G3331) he had this testimony, that he pleased God.
Heb 12:27  And this word, Yet once more, signifieth the removing(G3331) of those things that are shaken, as of things that are made, that those things which cannot be shaken may remain.

In Hebrews 11:5, we see Enoch is “translated” from earth to heaven. He is transferred. His position is changed. The same word “metatithemi” is seen in Gen 5:24 in the Septuagint (LXX) as well. Using the same meaning in place of the words “change” in Heb 7:12, provides a much different meaning to what it is usually understood to be. It is not that the priesthood “changed” as in, it was “replaced”. It is that the Priesthood has been “transferred”/”changed places” from earth to heaven. From an earthly Aaronic High Priest to Yeshua(Jesus’ true name), the High Priest of the Heavenly Temple. The necessity of a “change” in the Law, does not mean that God’s Law was replaced here on Earth. Rather that there is a transference also of the Law. This transference is speaking of the priesthood – of an Aaronic Priest on earth to a Priest in the line of Melchizadek in heaven. Not that the Aaronic priesthood is expunged, but that the Melchizadek Priest would receive preeminence standing before God with a far superior offering.

C. Other words that are connected to “change” in our English translations
There is also a need to see that our English Translations carry “change/changed” in place of other Greek Words from the Original Manuscripts which have diverse meanings to “allasso”.

G3337 – μεταλλάσσω – metallasso – exchange
Rom 1:25  Who changed(G3337-metallasso) the truth of God into a lie, and worshipped and served the creature more than the Creator, who is blessed for ever. Amen.
Rom 1:26  For this cause God gave them up unto vile affections: for even their women did change(G3337-metallasso) the natural use into that which is against nature:

D. Conclusion – Was there a necessity to change the Law or to transfer it?
Looking at the Original Greek wording, we can see that the “change” spoken of in Hebrews 7:12 is not the same “change” spoken of in Acts 6:14. Different words with different meanings have been used in the Original Greek Manuscripts, in these instances for a reason. Even though our English Translations use the same word “change” in place of these different Greek Words, the meaning is far different to what most Christians think it is. “Change” in Heb 7:12 cannot mean “replaced”, “make different” or “use another instead of”. The “Change” here denotes movement from one place to another. The necessity is to transpose or transfer to another place, which fits in line with the transference of the Priesthood from an Earthly one to a Heavenly one. This is the theme of the Book of Hebrews as the Author rightly sums up in Hebrews 8:1. The verse in question, Hebrews 7:12 in its Original Greek version does not speak of a “change” but a “transference” – hence it cannot be used as a proof text to say that God’s Law has changed.

Further Reading :
Old Covenant abolished by New Covenant? Part II – Does the Book of Hebrews prove that the Old Covenant is no more