God’s Word does not change. His plans and ways stand the test of time, and what He wills, He accomplishes without any variation. The Appointments of our Creator highlighted in Leviticus 23 are a good example of this. Each of these “Feast Days” have a prophetic significance which is fulfilled and is yet to be fulfilled in Messiah Yeshua. They, just as the rest of His Word, cannot be changed, annulled or added to, till the Heavens and Earth themselves pass away. While many celebrate a variety of different Feasts and special days around the year, such as christmas and days venerating different saints, etc, God’s Holy days seem to be casted to the side as Old, Jewish and lacking. Nothing can be further from the truth. Casting His Word and “His Feasts”(as they are called in Lev 23:2) aside for days and traditions made by man was the exact “Sin of Jeroboam”, and one of many reasons that God sent “The House of Israel” into Assyrian Exile.

Jeroboam – The First King of the House of Israel 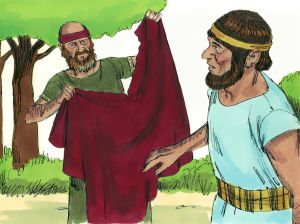 It all started with Solomon, son of David when he married many wives making covenants with the lands around them(1Kin 11:1,2). In his old age, Solomon was moved away from God by these many foreign wives(1Kin 11:3-8). And God, in His anger let many enemies rise around Solomon(1Kin 11:14-27). Furthermore, He would speak through Ahijah about His intentions to give 10 Tribes of the 12 to Jeroboam who Solomon had appointed ruler over the House of Joseph(1Kin 9-13 & 28-39). Only 2 Tribes consisting of Judah and Benjamin would be left for Solomon’s Son – Rehoboam(1Kin 12:21,23). So Jeroboam a man from the tribe of Ephraim would become the King of the 10 Tribes in the North known as the House of Israel/Ephraim/Joseph.

The Sin of Jeroboam
At the beginning of Jeroboam’s reign itself he did what he felt was right in his heart and before his eyes. As it reads,

1Ki 12:26-30 And Jeroboam said in his heart, Now shall the kingdom return to the house of David: If this people go up to do sacrifice in the house of the LORD at Jerusalem, then shall the heart of this people turn again unto their lord, even unto Rehoboam king of Judah, and they shall kill me, and go again to Rehoboam king of Judah. Whereupon the king took counsel, and made two calves of gold, and said unto them, It is too much for you to go up to Jerusalem: behold thy gods, O Israel, which brought thee up out of the land of Egypt.And he set the one in Bethel, and the other put he in Dan. And this thing became a sin: for the people went to worship before the one, even unto Dan.

Not only did he appoint a place of his own making, as a worship place for God, he also made priests of anyone he deemed fit, making himself also a priest.

But his sin did not stop there; he went on to consecrate and make special feast (Appointed) days of his own.

From this point onwards, the Sin of Jeroboam is mentioned more than 20 times in the Books of Kings till the end of the Kingdom of Israel in 722BC.

1Ki 13:34 And this thing became sin unto the house of Jeroboam, even to cut it off, and to destroy it from off the face of the earth.
2Ki 17:22,23 For the children of Israel walked in all the sins of Jeroboam which he did; they departed not from them; Until the LORD removed Israel out of his sight, as he had said by all his servants the prophets. So was Israel carried away out of their own land to Assyria unto this day.

Appointing our own ways of worship and ordaining our own special days was a detestable thing in the eyes of our Father in Heaven. If He and His Word does not change, maybe we should be much more hesitant at joining the ranks of Jeroboam in changing the ways God has ordained in His heavenly wisdom.

Also Read
The Parable of the Prodigal Son & the 2 Houses of Israel
What’s “out of place” in this picture of the Birth of Christ?
Was Christ born in December?
What was celebrated on December 25th before it became Christmas?